Students Encouraged to Restore Education in Christ at Life on Tap

Christendom College students are united by a shared desire to impact the culture for the better. When they look out into the culture, however, they see the negative effects of secularism, particularly in schools. Young minds are being formed outside of Christian tradition more than ever, making the need for strong, articulate Catholic educators — like alumni Klarissa Blank (’14) and Christopher Foeckler (’12) — so important. Both spoke at the final Life on Tap alumni networking series event of 2020, sharing their success stories and encouraging students to become the educators schools desperately need.

Blank, who earned her B.A. in theology and her M.A. in evangelization and catechesis from Christendom, spoke first, touching upon her path to now serving as a Director of Religious Education and Youth Ministry at St. Rita’s Catholic Church in Alexandria, Virginia.

The second of her family to attend Christendom at the time, Blank fully chose to apply to the college after her incredible time at the Experience Christendom Summer Program. The classes, the faculty, and the students all impacted her for the better, and she knew she would grow at the college. After being accepted, Blank ultimately decided to major in theology, which set her up well for later working in the field of religious education. Her time in those classes, coupled with her friendships and relationships with her professors, led to her gaining more confidence in speaking about her faith.

“Anytime you’re evangelizing, anytime you’re defending and spreading the faith, it’s important to be approachable and be confident and willing to speak about your faith,” shared Blank. “Being involved at Christendom in various groups, I learned the people skills necessary to succeed later.”

She continued to develop those skills, along with administrative skills, as a member of Christendom’s staff after graduation, when she joined Christendom’s Admissions team as Admissions Counselor. After four years of serving the college, during which time she also completed her M.A., Blank applied for and was accepted as the DRE at St. Rita’s — a role she had felt called to for a long time.

Now as a DRE, Blank is responsible for the religious education program at the parish and all of its aspects, including: working with kids, but also with adults for the RCIA program; helping with the Catechesis of the Good Shepherd Program; and helping ensure catechists are meeting the Diocese’s standards of learning throughout the year.

Blank closed her talk with a few suggestions for current students if they are interested in education, encouraging them to be attentive in class to how the teachers organize and present their lecture, to make connections and network, and finally to volunteer to teach during college through Christendom’s Teaching Apprentice Practicum.

“One of the things that drew me to Christendom was our motto of restoring all things in Christ,” concluded Blank. “Ever since I was in high school, I was interested in working for the Church. I am fortunate that I get to live out the mission of the college every day at my work. I get to see those people transformed by learning the faith of Christ, by receiving the sacraments, so I’m very fortunate that I get to see the restoration.” 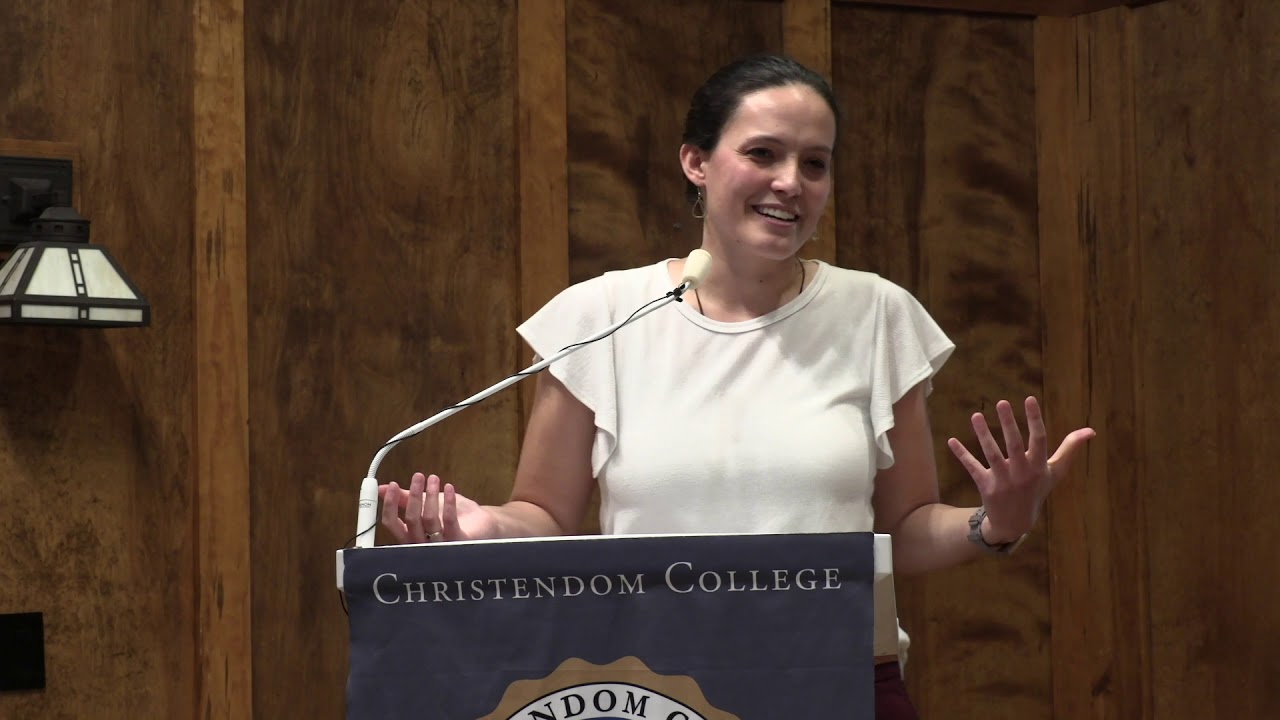 Foeckler agreed with Blank’s thoughts on how gratifying it is to be a teacher and why it is such an important field for alumni to go into. Currently, Foeckler is a teacher at Chelsea Academy, a Catholic private school, where he has taught mathematics and theology for the past eight years.

He began his portion of the talk by delving into his current role and how he “stumbled” into it at the end of his senior year. After failing to secure funding from schools for graduate pursuits, Foeckler spent some time discerning his calling and ultimately found himself drawn to the education field. It was a not a career path he had originally envisioned but has become his passion now for nearly a decade. Foeckler recommended that students discern and “test every spirit” during their time at college, because they might also be surprised to see what God has planned for their lives.

When thinking back on what things helped him find success in his current role, Foeckler mentioned the necessity of seeing time spent as a student as a vocation.

“If you’re thinking about being a teacher, you have to learn,” said Foeckler. “At this stage in your life, you have a vocation as a student at Christendom. Everything else has its place, but this is primarily a school. Focus on what you’re doing now and do it excellently. There is so much anxiety about what is coming in the next few years, but God is leading you right now. God puts in your life, right now, the things that will lead you to what is next.”

Foeckler finished with a few recommendations for students, including attending Chester-Belloc debates to hone public speaking skills and taking advantage of peer student teaching opportunities on campus, such as the Writing Center.

“Christendom may be an academic institution, but for students it’s a temporary one,” concluded Foeckler. “Discern, but do not let your hearts be troubled. Put your trust in the Lord and He will take you where you need to go.”