Ugly architecture dominates both city skylines and residential neighborhoods in today’s culture. One look at the beauty of St. Peter’s Basilica compared to most modern buildings is enough to drive that point home. And yet, this tide can be turned, according to Christendom alumni Taksit Dhanagom (‘07) and Pat Haggerty (‘96). Both returned to campus on Wednesday, September 15, to speak at the first Life on Tap alumni networking event of the 2021-22 academic year, sharing invaluable information to the undergraduates who attended.

Both alumni share an impressive resume. Dhanagom has spent the last 6 years practicing architecture in the D.C. and Annapolis area, working on a variety of projects ranging from $2-to-450 million dollars, including sports arenas and residential projects. Dhanagom graduated Christendom with a BA in philosophy and theology and pursued a Master’s in classical architecture from the University of Notre Dame.

Haggerty is a licensed architect and has been working in D.C., Maryland, and Virginia since 2000. He transferred from Christendom and earned a BA and MA in architecture from the Catholic University of America. He is currently managing the new Christ the King Chapel.

The evening started with Career and Professional Development Director Kristin Stephens asking both alumni how they knew they wanted to pursue architecture. Haggerty said that he did not always know that he wanted to be an architect but there were seeds that were planted as a child that later grew into an interest.

Haggerty explained that as a boy he always loved to draw and loved to watch a family friend, who was an architect, construct his projects.  In high school, Haggerty worked for an architecture company. After this experience, he turned away from the idea of pursuing architecture and thought mechanical engineering was where he would find his passion. Haggerty went to VMI to pursue mechanical engineering and soon found it unsatisfactory and transferred to Christendom instead.

After a year at Christendom, Haggerty decided to take a semester off to figure out what his calling was; during this process of discernment, he decided to pursue architecture at Catholic University. It was a long ride, Haggerty explained — architecture is a long process and it takes a lot of time and hard work to really become good at it.

Dhanagom experienced a similar interest in drawing as a child and loved science and math. In high school, he took a class on architecture and thought of it as “another sleepless night working on a senior project,” until he realized what he was doing was a toil of love and knew he wanted to pursue architecture. Although Dhanagom was offered a full ride to the University of Maryland in architecture, he chose instead to attend Christendom. To some this might sound crazy, but Dhanagom was confident in his decision.

“I was afraid if I went to a secular school at that time, the world would win me over. I wanted to first steep myself in the faith,” says Dhanagom.

Christendom helped to truly ground Dhanagom in the faith and develop Catholic habits. He graduated from Christendom confident in his faith and eager to go into the world and “restore all things in Christ.”

Moving on, Stephens asked what day-to-day life looks like for both alumni. Dhanagom answered first, saying it really depends on the type of project, but he normally meets with clients to discuss ideas or show them different drawings. One day he might go out to the site to oversee or spend the day at the computer using software to develop the structures. He explained there really is a variety in architecture which is something that really appeals to him.

Haggerty explained, “architecture is an amalgam of multiple professions’” and a “wide breadth of knowledge” where you study art, science, theory, history, and study of the human psyche.

They were then asked what their greatest triumphs they experienced in their careers. Haggerty said by far his favorite project is the new Christ the King Chapel, currently under construction at Christendom. Although he did not have the privilege of designing it, he said he has been honored to oversee the project.

Dhanagom said his biggest triumph was a restoration project he was assigned to after the previous manager quit. When he got there, they were three months behind schedule, but after a lot of hard work he was able to get them on track in a month.

These men also shared advice for students that they could be doing right now and explained how their education makes them eligible for this field. Haggerty advised to “learn the Faith and love God” while at Christendom. “Learn to concentrate on something you don’t like doing,” he said, and it will “help you go far in life.”

Dhanagom echoed Haggerty, saying “Christendom helped form my mind and be able to see the truth in matters” and “helped make me confident in what I understand.” He also advised to read books, practice drawing, and work summer jobs as a carpenter or electrician. He explained, the more you understand about the different working parts the better.

They also were asked how their fields help them to restore “All things in Christ.” Haggerty responded by saying in architecture you need to ask the question: “What is beautiful?”

“You have a big responsibility to restore all things through the beauty of your work,” said Haggerty. “There is a lot of ugly modern architecture, and your job will be to go against the steep opposition and learn what translates to beauty, through our Lord, and then use it to set the world on fire.” 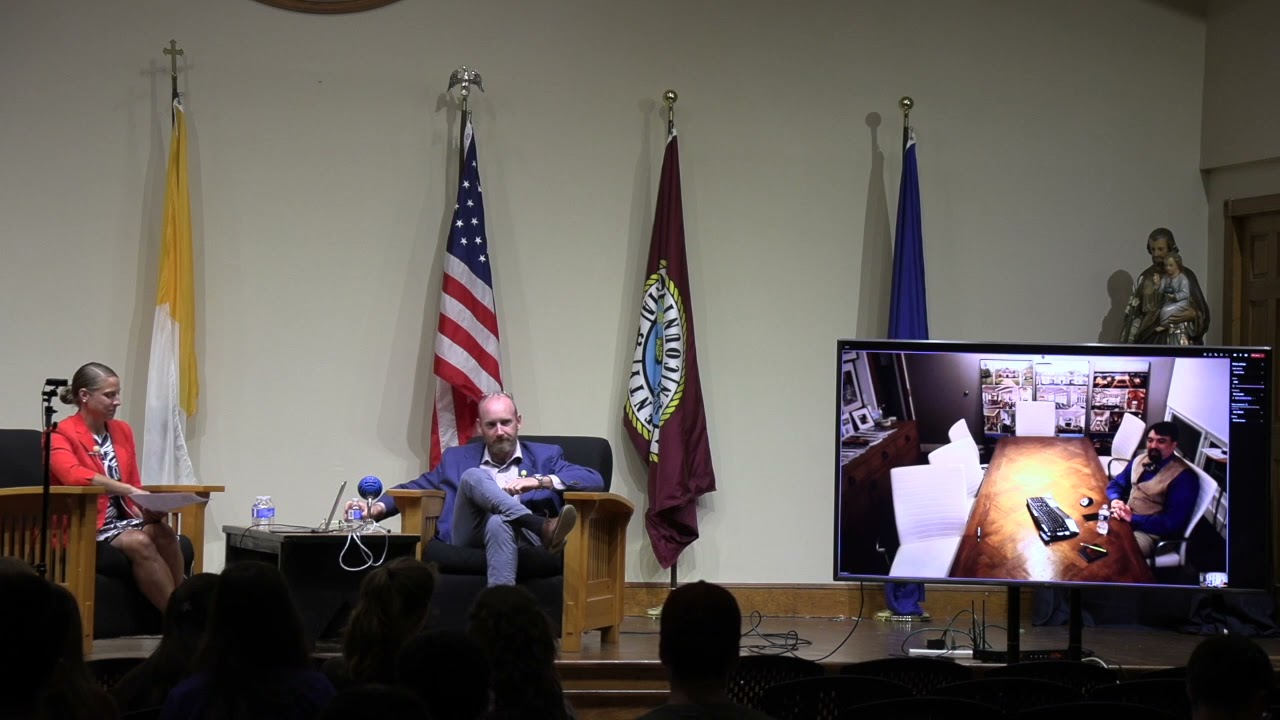 The evening concluded with the alumni giving the students tips for success. Dhanagom urged the students to push hard for time management and to find their passion and do it. He said you are more likely to aspire to do better if it is a “toil of Love” but warned against having your passions “enslave you.”  Dhanagom warned it is easy to turn architecture into a god, which causes damage to many peoples’ lives but a virtuous life helps you to avoid pitfalls.

Haggerty advised to be humble. He said “Architecture is full of big egos” so humility will serve you well in this field. He also said “show up every day, don’t complain much, and never say ‘it’s not my job’” and that will take you far in any field.