Working in the world of D.C. public policy can be intimidating, especially to young Catholics in today’s secularized world. However, alumni Colleen Harmon (’13) and Cyrus Artz (’10) encouraged Christendom students to not be intimidated and challenged them to take up their role in “restoring all things in Christ” at the latest Life on Tap alumni networking event, sharing invaluable information to the undergraduates who attended.

Both Harmon and Artz have found great success in the public policy world since graduating from the college. Harmon is the Director of the Young Leaders Program at the Heritage Foundation in Washington, D.C. Previously, she worked as an Executive Assistant and Scheduler for a Member of Congress from Pennsylvania and is currently pursuing a Master’s in Government from Hillsdale College.

Artz, on the other hand, serves as Staff Director for the Republican staff of the U.S. House Education and Labor Committee. Previous Capitol Hill jobs include Chief of Staff and Legislative Director to Rep. Virginia Foxx (NC-05) and Parliamentarian for the committee. He majored in political science & economics at Christendom.

The evening started with Career and Professional Development Director Kristin Stephens asking both alumni how they knew they wanted to pursue a career in public policy. Artz answered first, explaining that, growing up, he fell in love with social studies and following the news.

“Growing up, my family was really involved in the Right to Life movement, but more on the legislative aspect of it,” recalled Artz.

He eventually interned at National Right to Life, which impacted him in deciding to major in political science and economics at Christendom

Harmon also was influenced to enter politics at an early age.

“In high school, my parents were very politically motivated… Each year we would attend the March for Life in D.C,” said Harmon. “This made me really think, ‘Why are we here?’ and developed a love for DC and what it stood for.”

When she later worked as an intern at The Heritage Foundation, she found that her education at Christendom helped her to see the role she was playing in the big picture. She explained that learning about salvation history through her core classes further helped her to understand the role she was playing in it. She encouraged students to really discern if they are called to public policy and boldly pursue it if they feel that tug on their heart.

“It is a prayerful decision, but when you see that spark follow that call,” said Harmon.

Stephens then asked Artz and Harmon about their current roles.

“As a director, I am responsible for bringing in 60-70 students and placing them in internships where they best exemplify their talents at The Heritage Foundation. Besides placing interns, I help facilitate them and sometimes run educational programs, and work to develop outreach strategies as well,” said Harmon.

She explained that, in a broader sense, she works with Heritage to give students whose speech is suppressed on secular campuses the resources and support they need to speak out. Harmon further reflected that she has not regretted her decision to move to D.C. and said, “I never feel tired by the beauty I see and being surrounded by a beautiful and complicated history.”

Artz gave a detailed explanation about what it is like to work for a member of Congress.

“Working as a Staff Director, I have 30 staff that I am responsible for to make sure they do their job. This position involves a lot of meetings, coordinating, and advising,” explained Artz. 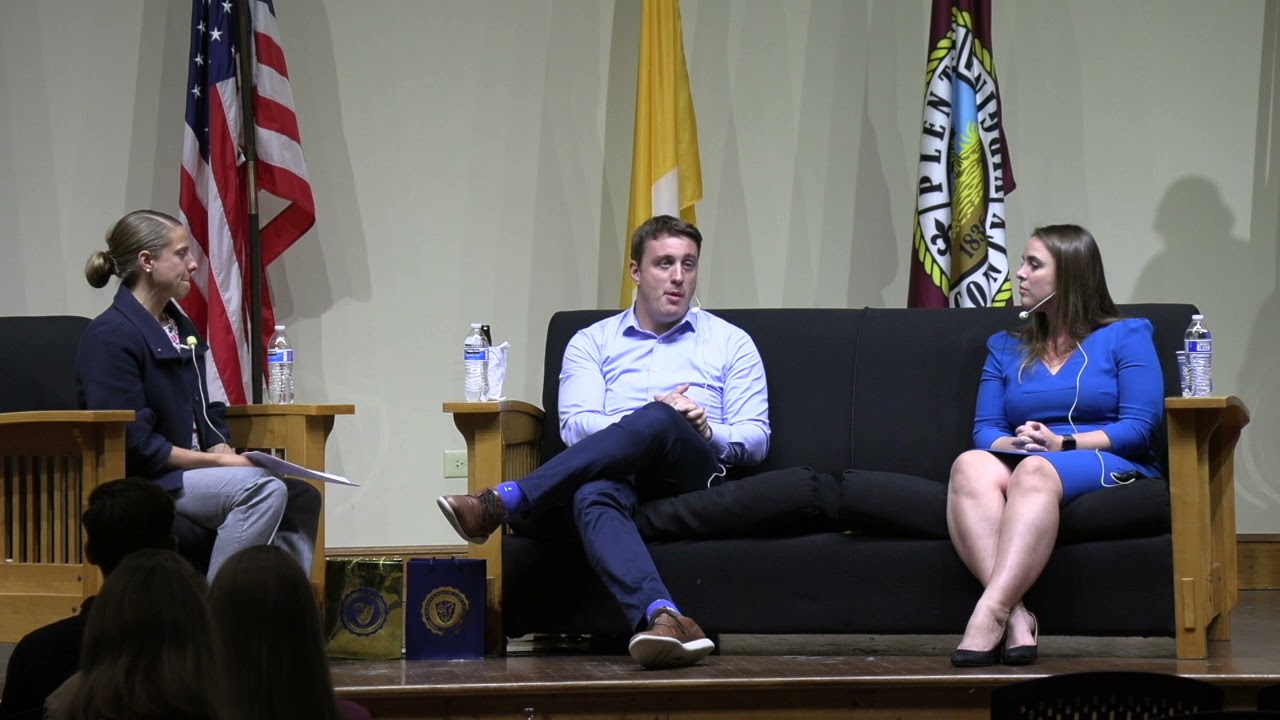 Stephens asked the alumni for more details on D.C. internships, how difficult they are to get, and if they are generally paid. Artz stressed that an internship is important and “If you want to be on the [Capitol] Hill, you need a Hill internship.”

Artz encouraged students that, just as Christendom is an investment, they should see internships as an investment in their career.

“You invest so much in your education, put the same investment in your career,” encouraged Artz.

Harmon stressed a similar point to Artz, saying that, even if it is difficult to get an internship on the Hill, it is definitely worth it. She encouraged students to really investigate internships and then, when you get one, to “Do the best you can, because the reputation you build there will be your reputation in D.C.”

Moving onto what students can currently do to prepare themselves for a career in public policy, Artz stressed that students need to work on their writing skills.

“I made it a point to read two things every day during my senior year,” said Artz. “This forced me to learn a lot about what was happening in the world which helped me to later have conversations on popular topics with people in D.C.”

Harmon followed on Artz, saying that, as a student, time is a hard concept because everything is seen through a semester time frame and it is a little narrow. Harmon empathized with the students, remembering that it was extremely difficult to have structure during the semester and offered advice on how to overcome that challenge.

“Approach college like a job and see each class as a meeting that you have to prepare for,” said Harmon. “This mindset helped me build structure and have a long term concept of time and develop good habits.”

She also encouraged the students to always remember and recognize their current vocation as a student.

“Ask your professors how you can improve your writing and practice writing professional emails to people,” said Harmon. “These simple steps will help to form a sense of clear communication and professionalism.”

Coming to the end of the event, Stephens asked the alumni if they wanted to leave the students with any last pieces of advice. Artz told the students to really take advantage of their studies at Christendom.

“It is never too late to pursue your dream career,” concluded Artz. “Do not to be discouraged by mistakes made in the past. Don’t think that if you messed up as a freshman it means you don’t have hope in a career.”

Harmon advised the students to really take advantage of what Christendom has to offer and take the time to grow spiritually.

“Now is a great time to discern, use the time you have now to develop your prayer life,” said Harmon. “This will help you through those moments when difficult, heavy stuff is happening. Take time for Adoration also. God speaks to saints in a chapel so make sure that through everything you put Adoration high on your priority list.”

This story was contributed by Ashlianna Kreiner (’22).