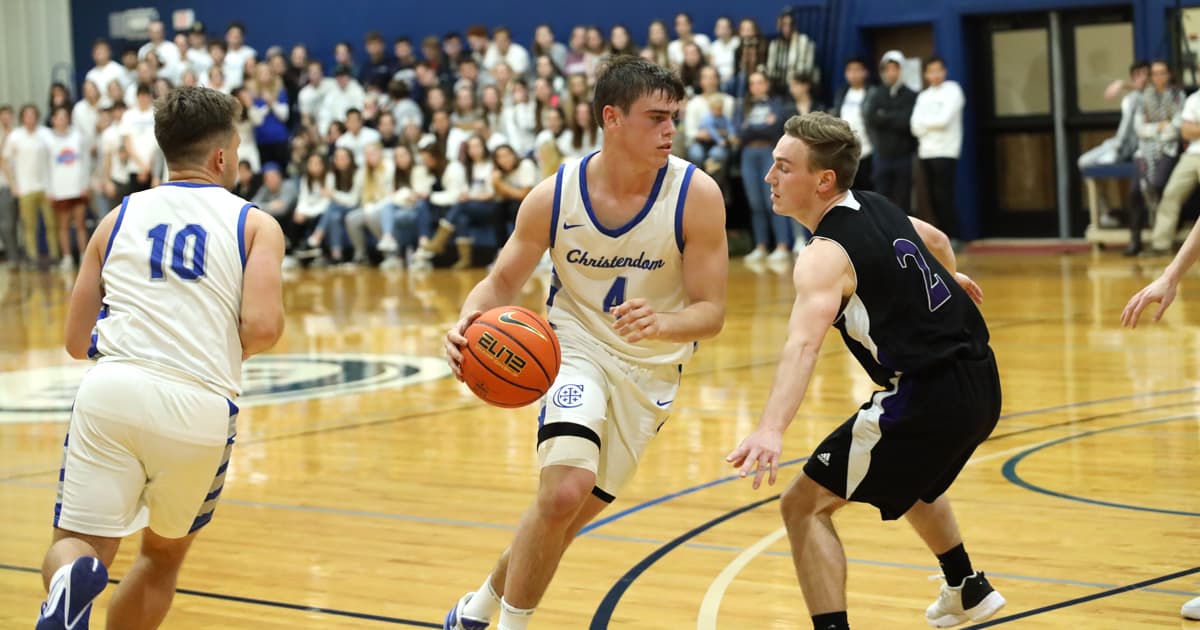 Christendom’s men’s and women’s basketball teams returned to the court to begin their 2022-23 seasons this past week, with both teams grabbing key wins on the road and at home. Both played — and defeated — Patrick Henry College on the road, while the men’s team thrilled a packed St. Louis the Crusader Gymnasium with a comeback win in their home opener as well.

Coming off a strong 2021-22 season, which saw the men’s and women’s teams field winning records, both teams looked to set the tone early in their opening games. The men’s team played first, taking on Patrick Henry College. In the first half, Christendom played strong, putting up a 32-23 lead. Patrick Henry pushed back hard against the team though, making the second half much tighter than expected. In the end, Christendom hung on for a tight 60-51 win, thanks to strong performances from Joe Dotson (who led the team with 17 points), Dominic Smith, and John Kennedy.

The women’s team played their first game of the season soon after and dominated from the start, even holding Patrick Henry to zero points in the second quarter. The team ultimately won 94-22, with star Catherine Thomas putting up an incredible 32-point performance, followed closely by a 26-point performance from Regina Bonvissuto and an 18-point game from Kate Walz.

On Saturday, the men’s team walked into St. Louis the Crusader Gymnasium for their home opener, taking on the Crown College in front of a packed — and loud — crowd of Crusader faithful. The game started slow for Christendom, with the offense struggling to get going. They managed to get things together as the first half went along, ultimately keeping the game close at 38-33 in favor of the Crown College.

In the second half, Christendom finally got momentum, with the team tying the game at 48-48 with 13 minutes to go. Once the team took the lead at 51-50, they never looked back, ultimately winning the game 81-74 and increasing their record to 2-0. Andrew Heisler led the team in points with 28 total, followed by Dotson with 15 points. Kennedy led the team with 13 rebounds, 6 of those being offensive boards, and 5 blocks.