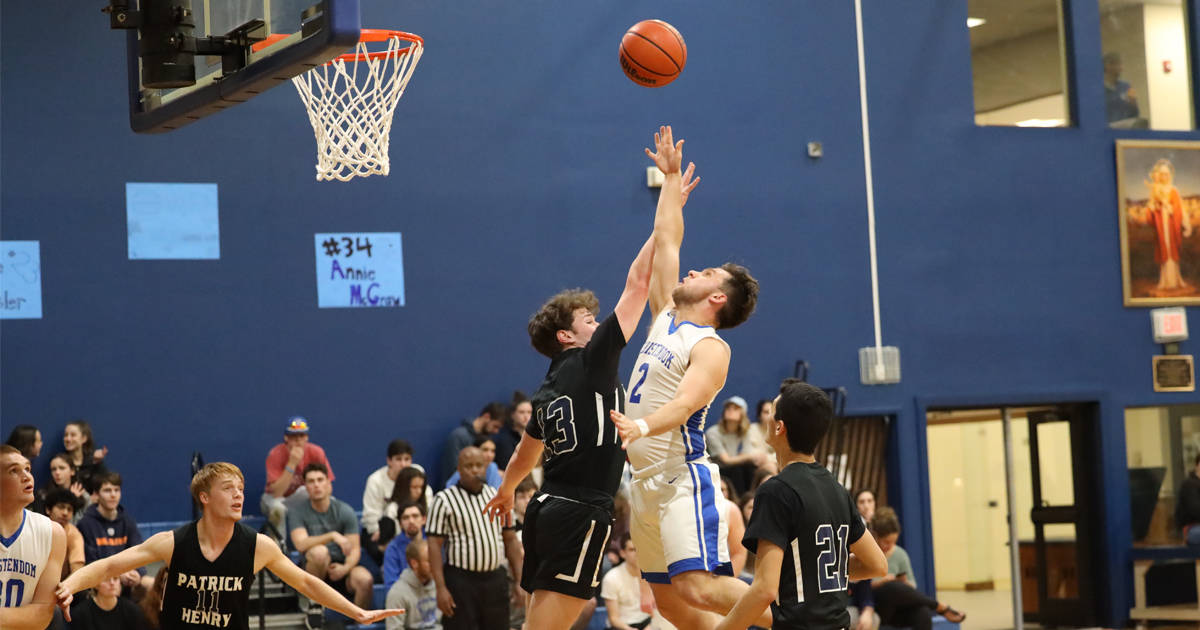 Historic seasons came to a close for the men’s and women’s basketball teams this past week, with the women finishing with one of their best seasons in school history. The men’s team finished with back-to-back wins as well, giving them a strong winning season punctuated by incredible performances from several players. Meanwhile, Christendom’s rugby team began their spring 7s season, winning three of four at a tournament in Maryland.

The 2021-22 basketball season was a highlight reel for Christendom athletes for both teams, with USCAA Player of the Week Catherine Thomas, freshman Miranda Keller, senior Owen Kennedy, and sophomores John Paul Vander Woude and Peter Ethridge putting up incredible seasons for Christendom. Their contributions were on full display in the final week of the season, with both teams playing final games at home before traveling on the road to finish the season.

The women’s basketball team, riding a 6-1 record in February going into the final week of the season, took on Patrick Henry at home for Senior Night on Wednesday. Christendom put on the pressure right from the start of the game, scoring a 14-point lead over the Sentinels in the first five minutes of the game. By halftime, Christendom was up 38-10. 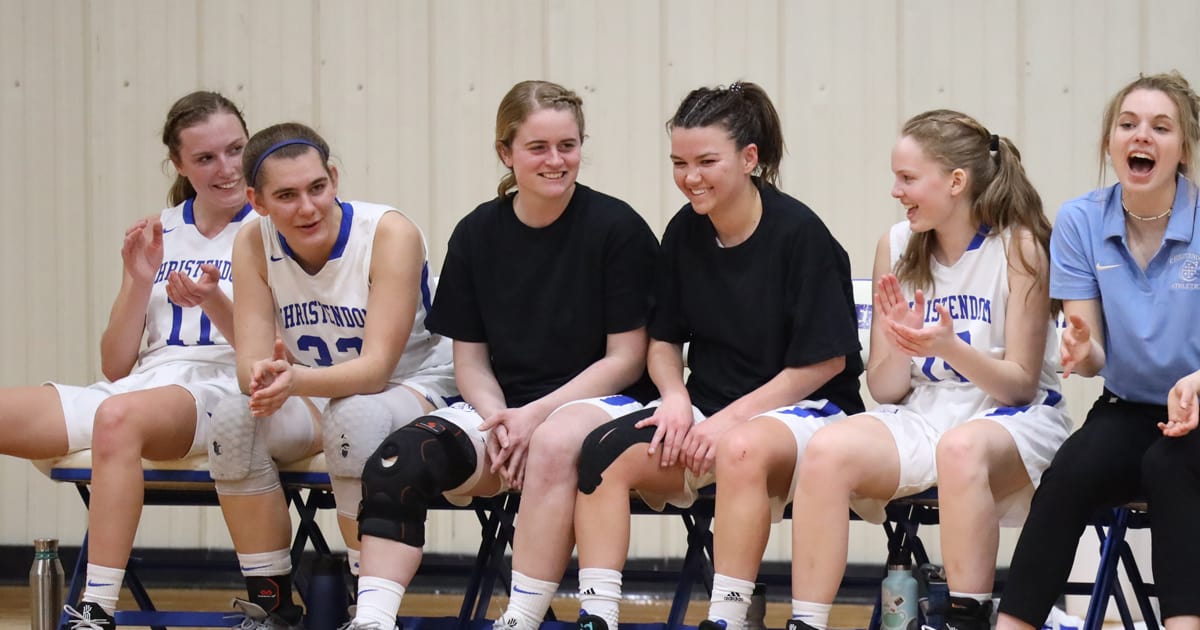 Seniors Annie Heisler (in black, left) and Annie McGraw (in black, right) were honored for their contributions to Christendom in their final home game.

While Patrick Henry mounted a comeback in the second half, Christendom was able to hold them off, even extending the lead to 40+ points. Senior Annie Heisler, who was injured for most of the season, strapped on her knee brace to play in her final game and ended her Christendom career with a 2-point jump shot in the final minutes of the game. Senior Annie McGraw, also in her final home game, nearly put up a triple-double, scoring nine points, eight assists, and eight rebounds, while also making three steals. Catherine Thomas also scored nineteen points and ten rebounds, with Miranda Keller putting up fifteen points and eighteen rebounds. Christendom ultimately won 77-35.

On the road on Saturday to finish their season, Christendom faced off against a tough Central Penn team. Despite finishing the first half with a tight lead, Central Penn was able to mount a comeback in the second, holding off the Christendom offense to pull off a 67-58 comeback win. Kate Walz, Catherine Thomas, and Miranda Keller played well for Christendom in the loss. Despite the loss, Christendom still finished with a 12-5 record — one of the best in school history.

For the men’s basketball team, a big 91-50 win wrapped up their home season as well on Wednesday. Taking on Patrick Henry, Christendom put up a 41-27 lead in the first half and never looked back. In the second half, Christendom essentially put away in the game in the first five minutes, extending their lead to 27 points in that duration. Owen Kennedy, in his final game for Christendom, dominated, scoring nineteen points, helping secure the win for Christendom. 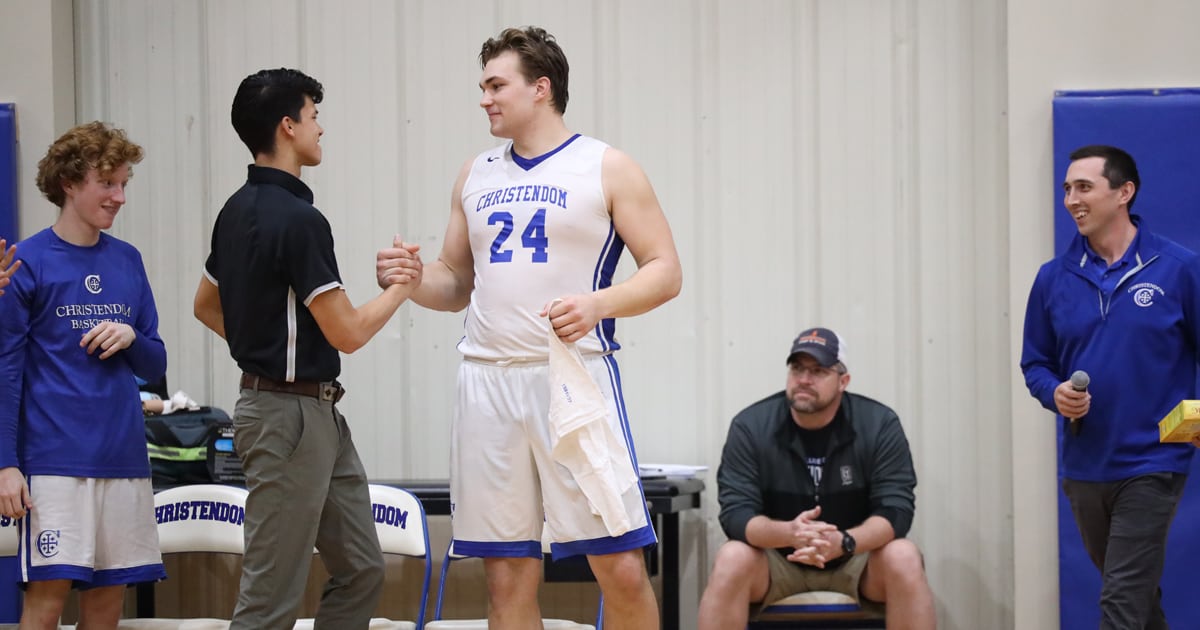 In the final game on Saturday, Christendom took on Appalachian Bible and played strong, holding off Appalachian enough in the first half to take a 14-point lead going into the second half. Led by John Paul Vander Woude and the Kennedy brothers, Christendom held the lead the rest of the way, coming up with a 76-58 win to finish the season. The back-to-back final wins secured a winning record for Christendom, finishing with a 10-8 season.

Coming off the high of a 15s National Championship in December, Christendom’s rugby team began their spring 7s season this past weekend as well, traveling to Pennsylvania for the Frostbite 7s tournament. The fast-paced, seven-minute games made each match unpredictable but Christendom played strong, winning their first two games handily against University of Maryland Baltimore County and Clarion. Their third game against Millersville finished with a similar result, with Christendom controlling the game and winning 24-7.

The unpredictable nature of 7s games showed up in the final match against Loyola Maryland, which would determine the winner of the tournament. Despite dominant performances in the first three games, Christendom saw a tough performance from Loyola, with the team jumping out to a lead and holding off Christendom’s offense. Loyola won the game 24-14, handing Christendom a tough loss but lessons to build off of heading into the Mossman 7s tournament in Tennesee in two weeks.