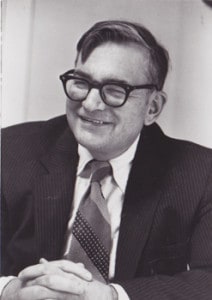 A native of Maine, Dr. Carroll was a summa cum laude history graduate of Bates College, after which, he earned an M.A. and Ph.D. in history from Columbia University. Following his time at Columbia, he attended the University of Colorado law school in 1962-64, where he met his future wife, Anne Westhoff. Between 1955 and 1961 he served two years with the U.S. Army Signal Corps, worked for the Central Intelligence Agency, and worked as an assistant command historian for the Second Air Force, Strategic Air Command. In 1967-70 he was a member of the California State Senate staff, and in 1970-72 worked as a staff member for the U.S. Congress.

As a convert to Catholicism, Dr. Carroll saw what was wrong in modern education a long time before he saw what was right about Christianity. He maintained that the people teaching in universities did not care whether truth existed or not, and it didn’t matter to them. But to him, it mattered a great deal.  In 1968, precisely when “everyone” seemed to be leaving, Carroll was baptized and received into the Catholic Church, influenced by his wife, and his godfather, Congressman John G. Schmitz.

In 1973, he joined the staff of Triumph, a monthly Catholic journal of opinion founded by L. Brent Bozell, Jr.. When Triumph and its summer program came to an end, Carroll determined to perpetuate its vision by founding a college.  In September, 1977, Christendom College opened its doors in Triangle, Virginia, from which it has since moved to its permanent location in Front Royal, Virginia.  Carroll founded Christendom as a co-educational liberal arts undergraduate college in response to the Second Vatican Council’s call for the formation of lay apostles.  He served as the College’s president from its opening until 1985 and then as the chairman of its History Department until his retirement in 2002.

Before his retirement, Carroll was one of the few teachers that every student had in common. For most, the memories of hearing Carroll’s interpretation and telling of history during History of Western Civilization I and II are unforgettable. There were the heroes: Constantine, Pelayo, Isabel of Spain, Athanasius, Don Juan of Austria, Our Lady of Fatima, Philip II, and Charlemagne; and the villains: Thomas Cranmer, Hitler, Cecil, Lenin, Rasputin, Stalin, Mao, Ho Chi Minh, Queen Elizabeth I, Pope Alexander VI, Arius, Theodora, and Justinian. 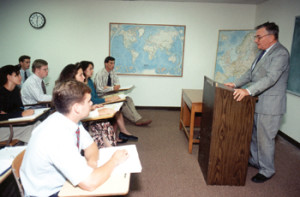 His explanations of the historic D-Day invasions; the complications of Watergate and the Vietnam War; the Battle of Lepanto; the Crusades; the Inquisition; Henry II kneeling for three days in the snow before Gregory VII; the story of Charles the Fat and Charles the Bald; the missionary work of Matteo Ricci; the great theological battle over “homoousios vs homoiousios;” and the Robber Council of Ephesus could never be surpassed. And then there are the memorable phrases: “History can be summed up in five words: Truth exists. The Incarnation happened,” “You can never bribe a pope,” and “One man can make a difference.”

His love of teaching history naturally spilled over into writing history: 1917: Red Banners White Mantle, Isabel of Spain, Our Lady of Guadalupe, The Rise and Fall of the Communist Revolution, The Last Crusade, and The Guillotine and the Cross.

Carroll received an Honorary Doctorate in Humane Letters from Christendom College in 1999 Additionally, he was awarded the College’s “Pro Deo et Patria Medal for Distinguished Service to God and Country,” and was the inaugural recipient of Christendom’s “Queen Isabel Catholic Vision of History Award,” both in 2007.

It is through his teaching enterprise at Christendom College that Carroll was able to reveal and develop his extraordinary skills as a Catholic historian, teacher, and author. He has won a well-deserved reputation as one of the foremost Catholic historians of our time, perhaps the greatest of the 20th Century.

At the time of his death in 2011, Carroll left behind his wife, Anne, (who herself was a well-respected author, Christ the King, Lord of History and Christ and the Americas, as well as the founder of Seton Home Study School and Seton School in Manassas, Virginia) and his “adopted children and grandchildren” – the 2640 alumni of Christendom College, which included 300 alumna-to-alumnus marriages (with 1000s of children), 63 priests, and 43 religious sisters and brothers. 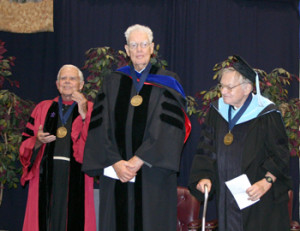