Christianity, and nothing short of it, must be made the element and principle of all education. . . . Where revealed truth has given the aid and direction to knowledge, knowledge of all kinds will minister to revealed truth. But if in education we begin with nature before grace, with evidences before faith, with science before conscience, with poetry before practice, we shall be doing much the same as if we were to indulge the appetite and passions and turn a deaf ear to reason. In each case we misplace what in its place is a Divine gift. -John Henry Newman, Discussions and Arguments 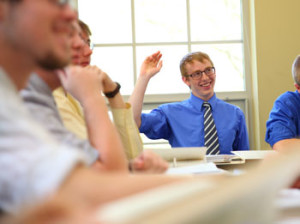 Inevitably, an educational program will be based upon some view of man’s nature and end.  The understanding of human nature implicit in the vast majority of university curricula today is secular humanism, a world-view in which man is ultimately no more than an animal, a by-product of blind evolution, having no ends or values but those which he determines for himself.  Hence contemporary college and university curricula are at odds with the view of man that formed Western civilization itself—the Catholic view that man is uniquely endowed with a rational and immortal soul, that he is created in the image and likeness of God, that his life is subject to objective moral norms, and that he is called to an end that transcends this life.  As today’s parents and students have been learning to their sorrow, educational institutions at odds with Western civilization cannot hand it on; they can only attack it with ideological violence or abandon it altogether, as they pursue lesser goals, pragmatic and utilitarian.

A century and a half ago, the Venerable John Henry Newman was already doing battle with a utilitarian view of higher education.  He, too, had heard the shortsighted demand with which we are all too familiar: that education be of immediate utility or usefulness (i.e. lucrative). In the nine discourses of The Idea of a University, Newman outlined a nobler view of education and summarized it thus:

This process of training, by which the intellect, instead of being formed or sacrificed to some particular or accidental purpose, some specific trade or profession, or study or science, is disciplined for its own sake, for the perception of its own proper object, and for its own highest culture, is called Liberal Education. (I.vii.1)

Following Newman’s lead, Christendom College does not limit its aims to the training of students for particular careers. It seeks, rather, to give them the arts that are fundamental to the life of reason itself. These “liberal arts” are universal in application, both inside and outside a chosen career.

The liberal arts student learns to think logically and to express himself clearly—skills absolutely necessary for one who wishes to influence his society for the better. He immerses himself in the great ideas and works of the Western tradition in order to appropriate that tradition and make his own contribution to it. He studies the past actions of mankind in history and the morality of individual and corporate deeds in order more prudently to determine his own actions, assess his society, and influence the course of events. For this very reason, no graduates are more eagerly sought in law, business, journalism, politics, teaching or other professions than the graduates of traditional liberal arts colleges such as Christendom.